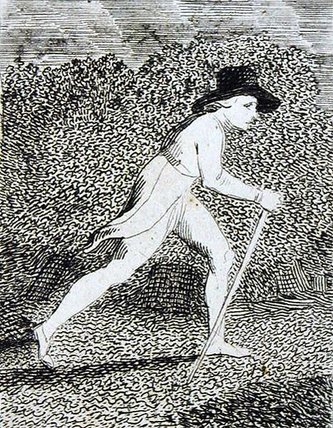 “It is a great art to saunter”

Thoreau’s essay Walking was originally titled Walking and the Wild and it offers one of the best insights into Thoreau’s inseparable relation between walking and thinking. For Thoreau the act of walking was the art of walking, and an art that few in his time fully understood. Thoreau likewise equated walking with wildness and freedom;”In wildness is the preservation of the world“, and “Life consists with wildness“, giving emphasis to that which is wildest being likewise the most alive! He also reminds and instructs by saying we should, like the camel, ruminate while we walk.

It will do us good service to place some of these ruminations by Thoreau into a broader context of his times, and specifically to the questions concerning modes of transport. We must remember that America was a continent discovered by foot. Early explorations certainly utilized rivers as major arteries of travel, however the foot reigned supreme for all true exploratory rambles into the adjoining wilds in early American settlement. Consider such intrepid figures as a Daniel Boone or Lewis and Clark as prime examples. It wasn’t until much later in our collective story that we see the encroachment of the railroad, and our nation moving from being a pedestrian culture to a riding culture. Perhaps the very first intrusive inroad into the art of walking was from the horse, but by the 19th century the rails were running supreme, and the rest of the story up to and including the present is certainly filled by the automobile.

In a very real way, just like the Spanish introduction of the horse drove the walking Native American from the open plains, modern forms of transport have driven the walker into the confines of domestic movement and subjugated open space into a homogenized landscape transcribed by commuters. The walker has become a very poor relation, and we have witnessed a cultural metamorphosis from a walking, riding, driving, to a sitting society. And even the spaces we pass through today are now virtual hybrids of that once homogenized and pasteurized landscape that was once the wild. Walking alas has been reduced to sport, and we exist predominantly as absentee spectators even there within that realm!

But this is not a time to bemoan the loss of the wild for it has always been there, and it always will. Great awareness, and mobilization, has been gathered on this front since the dawning of the environmental movement in the 60’s and I, like Thoreau, have faith in that ‘seed’. But in regards to thought, and thinking in general, I have huge concern!

Emerson philosophized that “civilized man has built a coach, but he has lost the use of his feet“, and wondered what effect the emerging sedentary society would have upon our collective thought process. Thoreau put that thought into action by actively exploring and perambulating the world through the backyards of Concord, and rediscovering the transcendent connection between walking and thinking. For Thoreau, the whistle of the train became synonymous with the sounds of commerce and speed and signaled our capacity to think being sacrificed at the altar of mass modern efficiency. Walking opened Thoreau to the ‘west‘, which was his hoped for American response to the decay associated with the urban industrial reduction of life and living to the machinery of profit in the pursuit of happiness. Walking to the west was the opening to the wild, which was likewise a transcendent journey into the far distant world of values than those reflected by the thinking of his day.

For Thoreau the most alive and free was the wildest, and the surest means for preserving ourselves, and the world in which we live. Life at 3 miles per hour may seem like a simple panacea for our times, but I would suggest that a walk may well be the surest way into an emerging new paradigm for our times. The longest journey begins with the first step and we have never been in such need of new direction. And it will provide the time and space for listening to our very own thoughts!

In the biblical sense of the word, to sin was ‘to miss the mark‘, and repentance meant to ‘have a change of mind‘. It is time for a walk – and a long one at that! The times require new thoughts, more wildness, and true freedom too not only hear, but to walk to the beat of a different drummer!

2 thoughts on “Walking and the Wild”

The Art of Tracking, the Origin of Science and its implications for Citizen Science and Scientific Research

Rambling in the British Countryside